On A Roll On The Radio 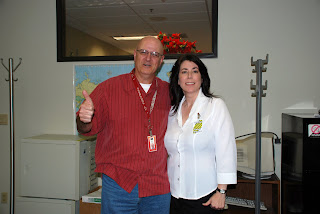 I’m floating on airwaves these days.

* Made the right Laker call on the radio.

* Heard the sharpest hoop voice on the dial in Dean Merrill.

* Met the No. 1 radio personality, Tammy Bruce (the nonbaldy above).

My call. I had enough of the Laker bashing. Especially the piling on Phil Jackson.

L.A.’s favorite team loses one playoff game, and this city loses it. The screaming comes in loud and clear on sports talk radio.

Take KLAA, the Angels’ station. When not dissecting every Halo pitch, the voices hang on every Laker shot and miss. I love it, but last week reached my limit. The morning show, “The Sports Lodge,” kept hammering Jackson, with Roger Lodge and sidekick Dave Smith yelling fire in a crowded radio booth.

So after the Lakers’ Game 4 loss at Denver, I entered the fray. Called in, heard Lodge say “Bucky from Buena Park” and took off.

After lauding the show for reaching our military heroes via Armed Forces Radio, I said: “I’m tired of your myopia when it comes to Phil Jackson. He’s the greatest coach in history. And he’s going to turn Lamar Odom into our J.R. Smith.”

That would be Odom, L.A.’s towering talent, and Smith, the cocky gun on the Nuggets. Or Thuggets, full of other tattooed snots.

The Thugs’ low came amid Smith’s 24-point blitz in Game 4. Flapped his elbows in Jackson’s face. The coach with nine NBA titles looked down to avoid giving J.R. — Just Rank— the eagle eye.

So there was Lodge’s Hollywood and Whine belittling Jackson. Saying Phil won all his titles only because of great players.

I responded: “He has great players now and will win it all.” For a record 10th NBA championship.

Lodge kept trying to make like a sports expert. Only he sounded like he was still hosting “Blind Date.”

The next two games, Odom produced in-your-face games, and L.A. is back in the NBA Finals. What was that about Jackson losing his touch, Lodge?

Dean Merrill. Remember that name. He’s the best on-air hoop analyst you’ve never heard of. That’s because he’s been a ref of high school and college games in the L.A. area, not a slickster on ESPN. Yet he dribbles circles around the network guys, notably Magic Johnson, who has two serious flaws: 1. He’s part owner of the Lakers, making his ESPN work unethical; 2. he’s terrible, with syntax to match.

He comes on Jeff Biggs’ afternoon KLAA show and breaks down the playoffs like the point guard Magic used to be.

Why all the fouls against the Lakers? Don’t blame the refs, says Merrill. Denver was playing Crash Basketball, with all five players hitting the boards, vacuuming rebounds and drawing hacks.

Merrill paints inside basketball like no one. Only Jon Barry on ESPN comes close.

The Dean of Hoops is so compelling, the message is obvious. He should have his own show.

Tammy Bruce. She has her own show, but you don’t hear it. Why? She’s buried on Saturday afternoons on KABC in Los Angeles.

The only folks listening are crazies like me. And I’m crazy about Tammy. She’s the best. Period.

She takes tough political stands. And sells them with her brilliant overture.

Last year she nailed it. Debated a London lefty who wailed about Bush the butcher. Tammy could’ve sunk in this anti-W muck. Instead she threw it in the Brit’s face, saluting the president’s liberation of 53 million people.

Tammy has guts and a cool delivery. Then she visited my paper’s office last week, and wow. Is she hot. And lesbian, so there went that idea.

Still, I want to turn her on. On the radio, that is. And if she makes the right move and leaves tone-deaf KABC, which should have her on drive time, I’ll click on her Internet show.

By then, she’ll have plenty to cheer. Starting with the Lakers’ championship.

Bucky Fox is an author in Southern California and the editor of BuckyFox.com.
Posted by Unknown at 10:38 AM No comments:

Nothing New About This New York Mess 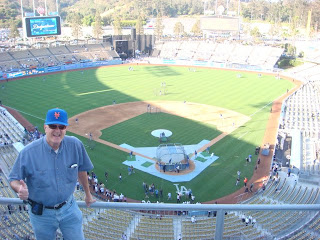 The 1962 New York Mets supposedly died with their 40-120 record. Their Marvelous Marv mishmash is just a joke of a memory.

Then again, it’s still live and in action.

The Mets who came to last week looked so laughable, you’d have thought Casey Stengel was still managing them.

Trivia: Why did the ’62 Mets lose just 120 games? They had one tie and a rainout they didn’t bother to make up.

Jerry Manuel is the skipper these days. Suffering through the flubs that Casey used for punch lines, Manuel doesn’t have the Ol’ Professor’s wit. Just his headaches. As when Ryan Church failed to touch third base, helping New York lose Game 1 of the three-game sweep.

Manuel’s standup went like this: “I can’t explain how or why or anything, but he actually missed the base.”

My only consolation is I had left Dodger Stadium in the eighth inning of that first game. So I missed Church’s sin. Plus a you-got-it-I-got-it fly ball that dropped in the Mets’ outfield. Plus a wide throw home that clinched their 3-2 loss.

Trivia: Who was the only future Hall of Famer on the ’62 Mets? Richie Ashburn.

I do. Even believe in them. Which is why I fought traffic to catch that series opener. I’ve been a blue-and-orange fan since Seaver and Koosman trumped ’62 with their Amazin’ title of 1969.

Trivia: Who played on all four teams that were originally in ? Darryl Strawberry, Jose Vizcaino and Ricky Ledee.

I’ll hang with my team through these dark nights. How dark? Injuries to infielder Jose Reyes and his backup, Alex Cora. Leaving Ramon Martinez to go oh for 12 in the series.

was so limp, Scully said: “Ramon Martinez is about ready to put an ad in the paper to get a base hit.”

Ramon wasn’t alone. The Met bats had no news fit to print. By Game 3, all this team did was leave runners dead on base. And lose 2-1. And look ready to collapse from first to last place by season’s end.

This was supposed to be a showdown between two contenders. The problem was the Mets were more suited for the Laugh Factory on the Sunset Strip.

Still, watching the Mets at Dodger Stadium was a ball. Sat up in the stratosphere with season-ticket holders, and one of them was a living almanac. He offered tidbits such as:

What was the longest-running intact outfield? ’s Bob Skinner, Bill Virdon and Roberto Clemente from 1956 to ’63.

Then came this gem from another in the group:

What team has the longest current winning streak in World Series games? The Reds.

Such byplay at a major league game is unbeatable. Dodger Stadium makes it all the more enjoyable with the organ. While so many other ballparks blare rock music, Chavez Ravine sticks with Nancy Bea and her show tunes, such as Camelot’s “What Do the Simple Folk Do?”

For a Mets fan, that Think Blue aura was the only winner of the week.

Bucky Fox is the author of "The Mets Fan's Little Book of Wisdom" and CEO of BuckyFox.com.

Posted by Unknown at 7:37 AM No comments: 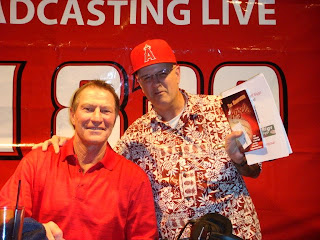 Posted by Unknown at 3:58 PM No comments:

From Pacquiao to Teixeira, I Want Answers Now 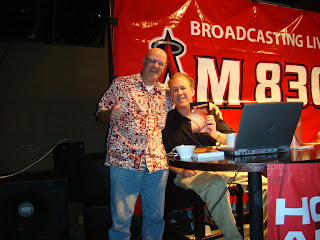 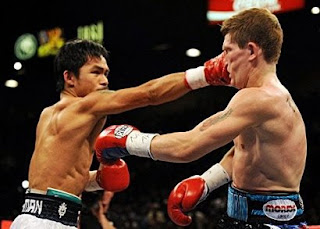 Questions after a weekend of boxing bashes, Derby dashes and general sports clashes:

How can I land Teddy Atlas' job? Dude picked Ricky Hatton to beat Manny Pacquiao. No wonder Atlas sports a mashed nose. The bone must've jammed back in his brain.

The only thing the Hitman hit was the canvas in Round 2. That was after Pac-Man planted his feet for the longest period in boxing history and hooked Hatton silly.

The ref's immediate stoppage made it a TKO. By technical, that must mean technically Hatton was a boxer.

In reality, this was a knockout a 3-year-old girl could've seen coming. I asked little Bianca at a boxing party when Pac-Man would win, and she put up three fingers. Close enough.

When it came to Pac-Man, what was with the Atlas shrug? The old Mike Tyson trainer must've been too busy pondering his next ESPN dollars to have any sense. Ax the guy and hire me.

How do I get Michael Buffer's job? I mean, how tough is introducing boxers? Promise, I can handle "Let's get ready to stummmmmbllllllle."

What's with HBO averting its gaze from the round girls? You know, the high-heeled, hotly garbed babes trotting in the ring with posters in case you forget what round it is. Instead of feeding us the babage, HBO zeroes in on sweaty faces of boxers and corner men.

One word for this pay-per-view trade-off: ripoff.

How can I replace the Kentucky Derby's voice? There was Tom Durkin on NBC noting every horse down the stretch. Except the one passing them all. When he finally said Mine That Bird, he had long clinched the roses.

One of the truly blown calls. I'm ready to stand in.

Does Barry Melrose have it good or what? Couldn't cut it as Tampa Bay's coach in the shortest tryout in NHL annals. So he's back breaking down hockey for ESPN.

Remember that ESPN broadcasts no hockey games. So Melrose spends, oh, two minutes a night chatting after catching action on the tube. And makes tons. I'm in the wrong business.

Amid the Manny and A-Rod hysteria, what to do about steroids? Legalize them.

Even if the Lakers make the NBA Finals, how do they handle LeBron James? Nail him on a steroid charge.

Why did the Lakers’ bench go from NBA tops to flops by playoff time? They traded Vladimir Radmanovic. With him starting, L.A. sizzled with a second unit starring Trevor Ariza. Now that Ariza fills Rad’s starting spot, no one’s left to spark the reserves. That’s why those 15-point leads vanish faster than you can say Luke Walton.

Maybe Hudson is too pretentious to notice such teams as the San Francisco Giants, whose left side of the infield is as black as their caps. Only the third baseman, Pablo Sandoval, hails from Venezuela, and their shortstop, Edgar Renteria, is a Colombian.

Then there's the obvious shift down the road from Hudson's Dodger Stadium. The Angels won the 2002 World Series with two black regulars, L.A.'s own Garret Anderson and Puerto Rican Bengie Molina. Now they have two white regulars, Floridians Mike Napoli and Jeff Mathis.

When will teams' radio networks get with it? They feed the waves with pabulum whenever callers question talent and strategy.

That's why it was a breath of fresh air when Adam Dodge spoke up as a guest partner with Jeff Biggs on the Angels' KLAA. When a caller rooted for a Reggie Willits return to the Angels' outfield, I was expecting the knee-jerk response: "You're right, buddy. The guy's scrappy. Bring him back."

Dodge was different. He dismissed the idea. Said enemy pitchers had figured Willits out.

Dodge, a writer for Angelswin.com, sounded honest and compelling. That's a double play that radio should embrace. Advice for Biggs: Don't dodge him.

When will teams quit shelling out for losers? Take Mark Teixeira. Puts up huge numbers in Texas. So fantasy baseball types call him the second coming of Lou Gehrig. The Braves buy into it. They get worse. The Angels get sucked in. They go nowhere in the playoffs. The Yankees are sold on him. They're foundering.

The only pundit who blew the whistle was Phil Rogers. He's my old pal who covers baseball for the Chicago Tribune. Right after the Angels landed Teix last summer, Rogers shared his Texas drawl on KLAA and tattled on that down trend. Cut through the Bill James ratings -- Runs Created, Approximate Value -- and you can see Teixeira simply helps his teams lose.

Remind you of other Yankees? Maybe Bobby Bonds and A-Rod?

Bucky Fox is an editor in Southern California who runs BuckyFox.com and is the author of three baseball books, including "The Highflying Angels: Their 50 Greatest Hits, Pitches and Plays"
Posted by Unknown at 7:27 PM No comments: