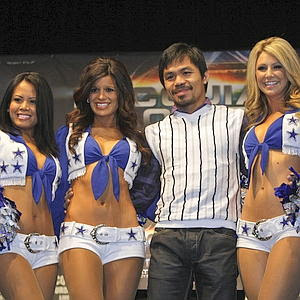 The best bet was on the Dallas Cowboy cheerleaders.

Did they ever beat boxing to the punch the other night.

Whereas the welterweight title fight had all the sting of a swatted bee, the Cowgirls sang like miked butterflies.

Did you catch their act? The trio — decked out in stars and not much else — made "The Star-Spangled Banner" flutter. Their a cappella voices had as much beauty as their bodies.

And after "home of the brave," every fight fan was indeed ready to rumble.

Only the main event wasn't much of an encore.

It featured Manny Pacquiao living up to his PacMan billing — chomping nonstop for 12 rounds.

But from the other corner? A turtle, as an office colleague called Joshua Clottey. He crawled all the way out of Africa to spend the whole fight in a shell.

Shades of Ali's 1974 rope a dope in the Congo. That time it turned into Foreman's stumble in the jungle.

This time it was a grope a dope in Texas. With that cover-up plot, Clottey was a Ghana, all right.

So what were fans to do? The 50,000 at Dallas Cowboys Stadium — most of whom had to be Filipinos — erupted for their hero. And booed stuck-like-a-blood Clottey.

Why join them? Glad I avoided the marathon drive from the West Coast and $50 parking. The best way to watch was at a Filipino party near Disneyland. Deep dishes of Philippine food, topped by cheering. The only thing that tasted bad was my $5 raffle ticket. I pulled out a 3, off by nine rounds.

So what's next on the menu? PacMan and whoever else he wants to devour.

The Filipino Fist stands 51-3-2 and on top of the world. Make his win total 52 if he captures his congressional seat he's fighting for in May.

The Honorable Manny Pacquiao would then fly back to strafe Mayweather or Mosley in one rich goodbye party.

With PacMan calling and dealing the shots, he better corral the Cowboy cheerleaders for another national anthem.

That would be the patriotic thing to do.


Bucky Fox is an author and editor in Southern California who runs BuckyFox.com.
Posted by Unknown at 5:39 PM No comments:

'My Fair Lady' Did It 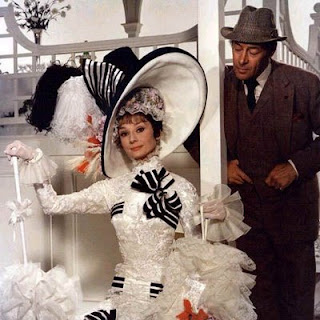 “My Fair Lady” is the heavyweight champ of musical comedies.

The melodies hit the ears with snappy jabs.

The lyrics clinch the performance with one killer knockout.

Harrison’s depiction of the speech fusspot properly led to his 1964 Oscar along with the film’s.

Movie viewers can kiss the Ascot turf that Harrison carried his Broadway act to the big screen. Hollywood blew it on the distaff side, passing on Broadway babe Julie Andrews in favor of Audrey Hepburn.

Talk bout a wayward punch. In Andrews, Warner Bros. had the top singing talent in the stable. No one could touch her voice.

Tough to fathom, but Julie didn’t have the star power of Audrey back then. So the movie “My Fair Lady” is stuck with a pouty player who can’t sing. The dubbed-in music voice belongs to Marni Nixon.

Enough of the nitpicking. “My Fair Lady” rocks because of its superior content. The song package alone stands octaves above any other in musical history.

Let’s strike up the winning strains:

4. “I Could Have Danced All Night”

This could be a top 10 on the song list of musical comedies. And we’re talking about one show.

Even the atmospheric tune at the embassy ball has one fine flow.

What did Lerner do? Simply produce stinging verse:

Higgins: By right she should be taken out and hung,
For the cold-blooded murder of the English tongue.

Higgins: I'd be equally as willing for a dentist to be drilling
than to ever let a woman in my life.

Eliza Doolittle: Never do I ever want to hear another word.
There isn't one I haven't heard.

Higgins: One man in a million may shout a bit.
Now and then there's one with slight defects;
One, perhaps, whose truthfulness you doubt a bit.
But by and large we are a marvelous sex!

Eliza: You, dear friend, who taught so well,
You can go to Hartford, Hereford and Hampshire.

Put that humor and depth up against more modern productions such as “The Phantom of the Opera.” It has, what, one memorable song?

Even musicals in the running for the showtime trophy — “The Music Man,” “The Sound of Music” — can’t compete in the sophistication ring.

Maybe I was brainwashed with “My Fair Lady.” While growing up, I’d wake up on Sundays to a tape of the show’s music that my dad habitually played.

He’d then pay the ultimate compliment to Lerner by using “jawohl” in his vernacular.

Now I do it. Does this bring back memories of Higgins’ landing “you did it” plaudits for his climactic triumph? And put the crowning touch on this all-time smash hit?


Bucky Fox is an author and editor in Southern California who runs BuckyFox.com.
Posted by Unknown at 7:58 AM No comments: