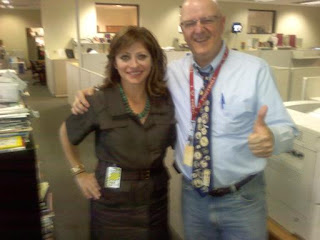 That alone was a show stopper.

I figured when she entered the office for our interview, she'd have an entourage worthy of Floyd Mayweather.

After all, Bartiromo is a heavyweight, a few classes above the unbeaten welterweight. As host of two shows on CNBC, she's all business.

Now she has a new book out. It's called "The 10 Laws of Enduring Success." After our chat, I can see why she's expert enough to have written it.

The main reason? She sure seems like the woman who arrived without airs. The only thing she carried was a smile.

Here's how she put it in her book: People respond to authenticity, even if you make mistakes or trip over a few words. They want to see a live human being, not a cardboard cutout.

Indeed. More reasons to like Bartiromo and her "10 Laws":

She's armed. Ready to throw out the first pitch before a Yankee Stadium game, I was in front of 60,000 screaming fans, with the wind blowing in my eyes and home plate looking a million miles away, and I thought, "Oh no, I'm not going to do it. I'm going to be booed." And then I took a deep breath and said, "You're exactly where you're supposed to be." And I threw the ball. It sailed over the plate into the catcher's mitt, and the crowd went wild.

She's nails. On her 34th birthday came 9/11. And she found herself in the midst of the terror attack's smoke. One woman was crying hysterically, and I remember thinking that this was not the time for panic or tears, that we had to keep our heads. I went over to her and said loudly and firmly, "Please calm down. It's important that you calm down." And she did, even as the floor we were standing on began to shake with the force of the second tower collapsing.

She's of solid stock. It would never have occurred to my parents to gripe about how hard they worked, to think that their lives were tougher than other people's or to feel entitled to have more for less effort. Even today, if I complain about being overworked, my mother rolls her eyes and says, "Come on, Maria, you're not chopping trees."

She's resourceful. Thinking of switching networks in the early '90s, I convinced my boss to allow me to work longer than the typical day. After my regular shift, I'd go into the field with the morning crews and pick up the news and sound bites when the markets opened. I'd write out scripts, and when I was alone with the crew, I'd ask them to shoot me on camera, reporting, so I'd have some clips. ... With their help I created a portfolio of clips: "Maria Bartiromo, reporting for CNN Business News."

She's upbeat. She quoted chess champion Garry Kasparov as saying, "Most people scrutinize their mistakes. ... I always scrutinized my victories." ... I thought his insight was priceless, and it clearly came from the mind of a competitor.

Bartiromo draws wisdom from another guy on top of his game: Joe Torre. It’s all part of a book stacked with wealthy knowledge.

And when Maria said goodbye after our chat? She signed her book, “Thank you so much for everything.”

To that, I'm still sighing "you're welcome."


Bucky Fox is an author and editor who runs BuckyFox.com and is devoted to his own Maria, wife Maria Fox. 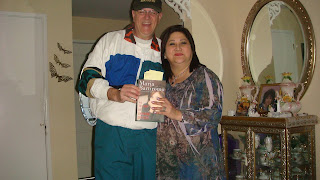 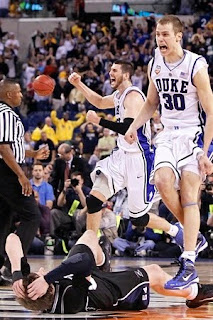 Gordon Hayward from half-court! No good!

One inch to the right, and Butler wins the championship!

Wow, was that ending for all time or what?

If Butler had cashed in that Hail Hayward? We'd be calling it the shot heard round the universe.

Because it would've been otherworldly. Think of the greatest plays to finish championships. None would touch the Butler Bomb.

Consider the backdrop. Tiny school. Against a hoop giant. Down by two. Full court to go. Heave. Ho, if he had only hit it.

As it is, Coach K's crew won the Carolina college's fourth title.

And the boys from Indiana will forever recall their "Hoosiers" moment — when Jimmy Chitwood's winning movie basket almost replayed in Indianapolis.

After Hayward's wayward shot, I thought of other plays for the ages.

Basketball. Keith Smart. His baseline jumper as the clock melted really was a Chitwood re-enactment. It gave the Indiana Hoosiers the title over Syracuse in 1987, the year after the movie came out.

Baseball. Bill Mazeroski. Game 7 of the 1960 World Series. Pittsburgh and the nuclear New York Yankees were tied 9-9. Bottom of the ninth. Pow. Maz mashed one over the left-field wall at Forbes Field. The fans poured over the Pirates.

Hockey. Bobby Orr. Boston led the 1970 Stanley Cup Finals three games to zip. But St. Louis had fought to a 3-3 overtime in Game 4. Orr shot. He flew over the ice. The puck pounded the net. The Bruins were on top.

Too bad Butler didn't do it too.

The Duke-Butler way puts the college back in basketball. And gives hope to my Missouri Tigers. Mike Anderson coaches our guys to get degrees on the patch to wealth after hoops. Now that could mean an NCAA title as well.

Giant stuff. You notice San Francisco's sizzling start this baseball season? Brings back memories of "The Giants Win the Pennant" 1962 album that filled my ears. There was Lon Simmons saying, "The Giants were looking for more than hamburgers. They were looking for steaks." Time for more calls like that in Frisco.

Speaking of calls. Can't get into Angel TV and radio games. The knifing of Rex Hudler and Steve "Light up the Halo" Physioc leaves the Orange County team with zero on-air vibe. I'll just have to catch games at the stadium.

So who wins it all? You have to like the Yankees' chances to repeat. I mean, all they did was add silver bullets to their ordnance. But I hate picking the obvious. Mark me down for Atlanta to give Bobby Cox the World Series trophy in his last season as skipper.

Don't look now. But isn't Baylor women's hoop center Brittney Griner a guy? Sure dunks and talks like one. Better check him out, especially after the track people uncovered South African impostor Caster Semenya for what he is.


Bucky Fox is an author and editor in Southern California who runs BuckyFox.com.
Posted by Unknown at 8:54 AM No comments: