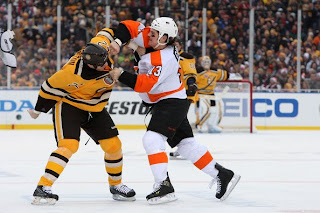 The soaringest sportsmen this year have to be ... let's see:

The Bobby Hull-reliving Blackhawks? No.

Try another bunch on the ice, this one with wings in their logo: the Flyers of Philadelphia.

You want fabled? The Flyers of 2010 already are.

We're not halfway through the year, and they're flying at a historic clip.

The Flyers shot into the National Hockey League finals by:

1. Outshooting the New York Rangers in the regular season's last game to squeak into the playoffs.

2. Facing a 0-3 series hole and winning the next four games against the Boston Bruins.

3. Facing a 0-3 hole in that seventh game and finishing off those Bruins 4-3.

4. Meeting hockey's other playoff shocker, the Montreal Canadiens, and skating to a 4-1 series triumph.

And who knows them? Philly fans, no doubt. A few of those loyalists might line your office. Other than them, no one would recognize Michael Leighton if he buzzed in. Or Peter Laviolette.

Goalie Leighton. The Petrolia, Ontario, native has his skate to the gas, with the Flyers riding him to what they hope is their first title since 1975. And what a shift into high gear. Leighton was always how he sounded — late in games. He played backup in Chicago, Nashville, Carolina, even Philly until taking over for an injured starter. Now Leighton is simply IN, stopping every shot that matters. Three shutouts in the five-game mauling of Montreal? Talk about a re-enactment of Ken Dryden circa '71.

Coach Laviollete. He's that rarity in the NHL, a stud American. He directed Carolina to the 2006 Stanley Cup and has Phenomenal Philly on the brink. Boston fans surely are bummed a neighbor nailed them, what with the First Flyer hailing from Norwood, Mass.

Speaking of Boston, it also had to be sickening to swallow its own medicine. Recall the Red Sox rose from 0-3 in the 2004 pennant series. That nuking of the New York Yankees capped baseball's greatest rebound. Six years later, Bostonians had to feel queasy.

The Giants of 1962. Sure, Bobby Thomson's Giants of 1951 gave New York drama worthy of Broadway. But the San Francisco version 11 years later was more improbable. Behind by four games in the standing with seven to go, the Giants were done. Really? Somehow they rallied to tie the Dodgers and force a three-game playoff. Then in the deciding game, the Giants looked dead again. They trailed 4-2 in the ninth inning. Yet they woke up to walk over Los Angeles for the pennant.

The Bengals of 1970. They started 1-6, hardly surprising for a team in just its third season. Forget it, right? Wrong. Winning its last seven games, Cincy gave Paul Brown the AFC Central title.


Bucky Fox is an author and editor in Southern California who runs BuckyFox.com.
Posted by Unknown at 5:52 PM No comments: