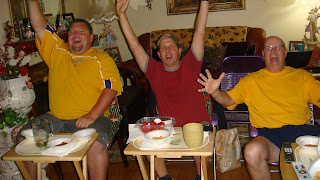 We were losing it.

Not the series. Our mind.

Such is L.A.’s hysteria these days with the Lakers.

Tied 2-2 with Oklahoma City in Round 1 of the NBA playoffs, fans freaked out. And watched the Purple and Gold thunder back to win in six.

Knotted 2-2 with Phoenix in Round 3, we reached for the gaspipe again. And saw Klub Kobe block out the Suns in six.

Now we’re in the meat of the NBA Finals. If you can call turkey hotdogs meat.

Fellow Laker loyalists dribbled over to my place to sow out on those and chips — with the requisite Diet Coke for a bow to balance — and worked it all off by sweating through … what? Our guys bounced Boston by 13. The only points in question were silly Jeff Van Gundy declarations on ABC.

My neighbor Tom showed up in his Laker jersey, matching my yellow T-shirt. My old buddy Ken came wearing his fanaticism. We comprised a trio in harmony — screaming and high-fiving over every Bynum dunk, every Artest three — while my sweet wife, Maria, came home to the chaos, took photos of the blast and escaped with a laugh.

No sweat. The Lakers are taller, quicker, younger, even meaner than the Celtics. This thing will be over six. And on this night we could kick back. Except when Van Gundy and sidekick Mark Jackson filled the telecast with wisdom on hamburgers, Scrabble and Chris Rock. This wasn’t an NBA broadcast as much as a Disney klatch.

Other than bitching about ABC’s missing graphics that kept us in the dark about fouls, we had one easy eve. A 52-inch Sony. High def. Unlimited food and drink. Which has to be killing sports bars. Why go there when you have a kick-ass aura at home?

And why were we going nuts? Because we love sports. Not for betting. Not for any other profitable motive. Just because. Tom, Ken and I might not click on political issues, but when it comes to the Lakers, it’s hug city. Plug the Koreans into this concept, and the DMZ would vanish.

And yet. The Lakers, the Celtics, the Angels, the Red Sox, doesn’t matter. They better get the message right now: Kiss the court and the turf for our fandom. Because this party is about to turn out the lights.

One day all of those teams will wake to empty stands. And lousy TV ratings.

1. Young people aren’t into making like hotdogs — steaming and resting on their buns — while mindlessly following the action. Kids today want to BE the action.

That means skateboarding, not vegging while some batter fiddles in the box.

That means video gaming, not remoting between the NBA and NHL.

Have you seen those video games? I saw Laker action on the screen that my grandkids were directing and was stunned by the cartoon’s authenticity. Kobe couldn’t have looked more real if he had hit his own 30-footer with five guys on him.

And this was two years ago. With tech’s progress, Kobe’s probably jumping out of a 3-D screen by now.

Hmmm: Sit while athletes do their thing? Or get in the game by pressing the video buttons?

You know what young people turned adults will be doing the next 20 years.

2. A dearth of dads. Or death of them, take your pick.

They’re just not around anymore. I don’t have the Census breakdown, but you know single moms rule these days. And are multiplying like the national debt.

Stopping that trend has about as much chance as the Clippers contending. Women are prospering on the job. They don’t need men, certainly not to bellow with such gems as “Hurry up.”

As dads disappear from houses, so does the force behind sports.

No dad, no drive to the stadium. That ultimately will end sports’ honeymoon as entertainment.

With dads, teams are on a fantasy ride. They play every night in Los Angeles and pack the place, 40,000 at Angel Stadium or Dodger Stadium. Think of how those thousands reach the park — via 20 miles of jammed highway — and fan loyalty reaches another level.

That fandom can’t last. And it won’t.

But that’s a quantum leap away. For now, we’re swimming in Laker Land. And loving it.


Bucky Fox is an author and editor in Southern California who runs BuckyFox.com.
Posted by Unknown at 11:08 AM No comments: