The OC Flyers Cook Up Fun 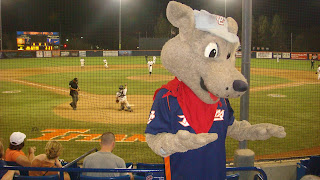 Nothing like a sizzling night of minor league baseball to stretch my smile.

For too long, dis and content were teammates this season.

My brother-in-law, Charley Bogdonoff, died, taking his convincing laugh and Redskin loyalty with him.

Then my father-in-law, Procopio Dazo, died, and there went 85 years of wisdom.

The air was just as cold. Hey, this is California. Supposed to be dreamin' weather here, isn't it? This wasn't just June swoon, but more like summer bummer.

Then came Saturday night. If you were at the Orange County Flyers' game in the warmth of Fullerton, you grasped what keeps most Californians from leaving. Jarring taxes and traffic? They can't blot out year-round sun, palms and waves. All without mosquitoes.

Did I mention baseball? The state has five major league teams, two a short toss from my house. But to see the game at its grandest, I like cruisin' to Fullerton — between Dodger and Angel stadiums.

There sits The Station, where the choo-choo Flyers are on track with Golden Baseball League games.

The sun-setting aura had the perfection of 1965 Sandy Koufax. Still, the plays weren't exactly that. This is farm ball, replete with shaky fielding.

By George, it was. The first baseman for the visitors — the St. George RoadRunners — fired something aimed at home but headed more toward the I-5, and the Flyers were 5-4 winners.

The OC nine sent St. George packing with a 10-2 smokin' in the nightcap, making the fans feel victorious.

Most, anyway. St. George is a town smack at the southern tip of Utah. The ride to Fullerton takes six hours. Yet plenty of RoadRunner fans sounded off on this mid-July eve.

Two were David and Roberta Salazar. They didn't need to drive 375 miles. Just a ways from their Pasadena area home. Why root for the visitors? Relatives. The St. George manager is nephew Darrell Evans, the former Brave, Giant and Tiger great who belted 414 homers. And the RoadRunners' first base coach is son-in-law Dan DiPace.

The Salazars were glad to catch their boys in Fullerton. The shorter trip, yes. And the utopian clime. As they pointed out, St. George is baking at 118 degrees.

Then there was Tyrone Richardson, another fan who trekked in to see the RoadRunners. Really, one Runner: center fielder Victor Butler.

Richardson, a college kid sporting a cap with the coolest logo in sports — the W of the Nationals — and 20 of his pals veered from the L.A.-Vegas pit stop of Victorville to cheer on their hero Butler.

Alas, Victor of his namesake ville couldn't do it. He popped up the first pitch he saw in Game 2 and came to a screeching halt with the rest of the RoadRunners.

As for the Flyer fans, this was party time. Their team won twice, yes. But minor league ball is so much more.

Seats are so close to the field, you sense the players and umps hear your advice.

A mascot — in this case, goofy Coal Train — makes the rounds, hamming it up to the music and PA exhortations.

And does the Flyers' public address guy ever deliver the hits. He's Chris Albaugh, who boosts his PA racket learned from years with the Raiders, Clippers, Angels and Dodgers to a wild level.

Albaugh said between games that when he took this job in the 2005 inaugural season, "I wanted to jack up the energy and have fun."

So he downloads movie sound bites and spits them out through the sound system.

When the Flyers get a man on, Albaugh punches in Tom Cruise from "Top Gun": "I feel the need ... the need for speed."

When a RoadRunner strikes out, the voice of Joe Pesci in "My Cousin Vinny" sneers, "I got no more use for this guy."

After one of a pile of St. George errors in Game 2, the voice of Tim Allen in "Toy Story" says: "There seems to be no sign of intelligent life anywhere."

And when a helicopter flies by, Cruise's voice blares: "Requesting a flyby."

Another "Top Gun" moment. Just as Manny Ayala's was. The Flyer righty from East L.A. College outgunned the RoadRunners in Game 2 and stands 7-0.

Maybe Ayala will follow other Golden Baseball League players who hopped to the majors — namely outfielder Daniel Nava this year in Boston, where he jacked a grand slam on the first pitch he faced in the bigs.

He can look up to the GBL managing lineup: Flyer skipper Paul Abbott, who pitched for the Twins and other MLB teams. Abbott's Flyer predecessor, Phil Nevin, the ex-Padre slugger now managing in the Tigers' system. And Nevin's predecessor, Gary Carter, the star Met who led the Flyers to the 2008 championship.

For now, Ayala and the other GBL players toil for squat, as one Flyer season-ticket fan put it. They keep at it for the joy of baseball and hopes of reaching The Show.

Reaping the rewards? The fans in this summer of sudden contentment.


Bucky Fox is an author and editor in Southern California who runs BuckyFox.com 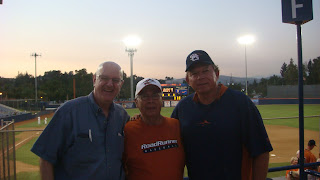 St. George manager Darrell Evans and I flank big RoadRunner fan David Salazar.
Posted by Unknown at 10:37 AM No comments: