Seles Hurt Her Spot In History 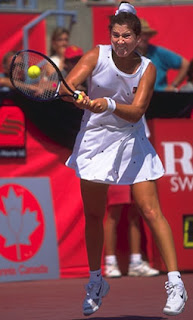 With her go the nine Grand Slam titles, the No. 1 ranking, the innovative grunting.

Even more, one theme holds serve with so many tennis fans: If Seles had not been knifed 16 years ago, she would’ve been the greatest women’s player in history.

The stabbing simply follows her. Seles certainly didn’t dodge it at her Hall induction in Newport, R.I.: “I would like to thank all my tennis fans who were there from my No. 1 days, through my stabbing, and my comeback.”

It’s really Seles’ signature as Mary Carillo and other tennis voices laud her in “should’ve been the greatest” terms.

After all, Seles had won eight Slam trophies by the spring of 1993. She had passed Steffi Graf as the world’s dominant player.

The pro-Seles campaign makes it clear: At just 19, Seles was on course to smash Grand Slam records. Only the attack of April 30, 1993, when German sicko Guenter Parche stabbed her in the upper back during a tournament in Hamburg, kept her from reaching the all-time pinnacle.

No one has publicly disputed that, so let me be the lone dissenter: Monica Seles blew it.

She must take responsibility for throwing away the meat of her tennis prime after she had physically recovered from the stabbing.

Seles lost her shot at all-time No. 1 because she left the pro circuit for two years and three months after the mugging. She thus skipped two U.S. Opens, two Australian Opens, two French Opens and two Wimbledons in which she really was healthy enough to compete.

She said during her 1993-95 break that the half-inch wound had healed — that the mental trauma was keeping her from playing.

Mental trauma? Let’s tell it like it is: She wasn’t tough enough to bounce right back.

Paul Pierce was stabbed in his neck, back and chest and hit over the head with a bottle in a nightclub brawl in September 2000. A month later he was in training camp for the Boston Celtics.

Picabo Street blew out her left knee while training for the ski season in December 1996. She was skiing again seven months later, and seven months after that won the Olympic super G gold medal.

Niki Lauda nearly burned to death in a Grand Prix car crash in 1976 and was back on the track in seven weeks. He won the world championship the next year.

Now that’s physical and mental trauma. Those athletes faced fear and conquered it immediately. They had the steel Seles lacked.

If Graf had been knifed, here’s betting she would’ve played within two months. Ditto Serena Williams. They’re stone-cold champions — damned if a little knife job would knock them out 27 months.

All Graf did during Seles’ hiatus was keep winning — on the way to a near-record 22 Grand Slam titles. Many tennis followers take offense at that, since it was a Graf fan who stuck it to Seles. Furthermore, say those fans, Seles was dominating Graf before the Hamburg ambush.

That’s another point no one disputes. Until now.

Graf, who had her own problems with her wayward father, had what it took to overcome them. She won big time on every surface. She’s the greatest champion of them all.

Seles will forever ponder why she let that knife-inflicted pause drag out into two-plus years.

It’s a decision that shows she didn’t have that champion’s mettle, no matter what the TV puff pieces say.

Bucky Fox is an author and editor in Southern California and runs BuckyFox.com.
Posted by Unknown at 4:55 PM 1 comment: Made two predictions at a recent L.A.-Texas game at Angel Stadium.

One was spot on. The other spot off.

With Juan Rivera up and the count 2-2, I did a Russ Hodges imitation: "Tell it bye-bye, baby!"

Rivera jacked the next pitch straight into the rocks.

Then in the fifth, with John Lackey leading 3-0, two out, no one on, I told my neighbor, Scott Paullin: "Knock on wood, but Lackey's cruisin'."

That's when the cruise crashed. Six runs crossed before you could say Ranger rout, and Mike Scioscia had the hook out. Luckless Lackey again. Or maybe he's pitchless these days.

Here it comes: The Angels will make a huge deal this month. That comes with the same guarantee I made while saying Phil Jackson would stay. I was right. Charles Barkley wrong.

Yes, our OC boys bashed the Yankees to our glee Friday night. But that flop against the Rangers, just when we had Team Ryan on an Express down the division, showed the Angels need power and pitching.

Watch Los Angeles let one of its catchers, Mike Napoli or Jeff Mathis, go. And Lackey.

Turn it down: HalosHeaven.com's Rev is calling Steve Physioc the worst announcer in baseball.

Why? Because the broadcaster has the gall to call attention to the biggest offensive night of the season. Or would've been if Andruw Jones had parked No. 4.

What, was Fizz supposed to scintillate us with a breakdown of the No. 1 Angel Stadium experience? Because if you wanted homer musings from the booth, that was the only thing left in that Ranger series.

Or could Physioc reach for a homer of substance, one that ties history? Good for him that he announced the news.

Which adds to his credentials as the worst announcer in baseball? Against what list? Worse than John Sterling, whom Yankee fans and the Post's Phil Mushnick are trying to ditch? Worse than voices for the Marlins, Royals, Twins? I doubt if the Rev has a clue. About the only listeners who do are those of American Forces Network, which airs games from every market for our troops around the globe.

I used to be one of those AFN listeners. And knew that despite L.A.'s love affair with Vin Scully, he was not the best. Certainly not better than the Giants' Hank Greenwald, the Orioles' Chuck Thompson and the White Sox combo of Harry Caray and Jimmy Piersall.

No, Physioc isn't the worst. Not even among Angel play-by-play guys. His voice far surpasses the tone of Rory Markas and Terry Smith. And the Fizz has more fun playing off Rex Hudler (with me and my Angel book above).

As far as our Orange County ears can figure, Physioc might be one of the best.

Quit this fire-Fizz campaign. It's childish.

We'd be better off bitching about something of substance: Angel players who don't speak English. At least not with a mic in front of them.

This Kendry Morales ignoring our language for Spanish the way Vlad does is outrageous. This is an American team with American fans paying them American millions.

Learn to speak to us without a Jose Mota dictionary, for crying out loud.

Follow hockey's lead. Guy Lafleur and Mario Lemieux were two French Canadians who entered the NHL knowing hardly any English. The Habs and Penguins made sure they learned it. Simple marketing. They knew their fan base spoke English, so get with the program, guys.

The Angels should do the same. So should every team in baseball, which has crashing attendance as it is.

Fans want players they can relate to. It sure would help if they could understand them.


Bucky Fox is an author and editor in Southern California who runs BuckyFox.com.
Posted by Unknown at 11:45 AM No comments: