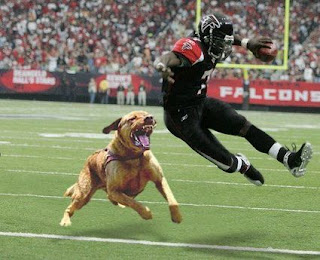 Mike Vick leaps from the doghouse to the Eagle nest.

Which begs the question: Is Vick a blue dog?

If so, he'd want to electrocute himself. Such is what he thinks of canines.

You might recall Vick was the quarterback sacked for treating the animals like dog meat. About the only perversion he didn't pull was eat them.

Otherwise, the hanging and drowning kept him busy. Until the cops caught him. And he waddled into prison.

Two years later Vick rolled out from behind bars. And Philly signed him.

While many expected dog lovers to howl over Vick's comeback, two reactions are reality:

1. When the Eagles say they consulted with the Humane Society, that means they paid for silence. You can bet the NFL contributed millions to keep the HS, PETA and whoever else from barking too loudly.

2. Sports fans don't care about mangled dogs. Listen to talk radio, and all you hear is Vick should play. Period.

I'm not one of those callers. My take: Vick is sick. His moral fiber is wretched. Yes, he served his time. No, I won't watch Eagle games. Can't stomach it.

Lousville Lover. And how about Rick Pitino? He's lucky the Vick story drowned him out.

Otherwise the hoops coach and his roll on a restaurant table with a floozy would've taken center court.

Now it's so what. Pitino the disciple of discipline screws around on his wife. And pays the woman for an abortion. A Cardinal sin in the old days. Now he's a Kentucky king of midlife sex.

I say this: At least he's not dunking dogs.

On a brighter note: The L.A. Angels keep winning with the best of them. And they're doing it despite injuries in all corners of the clubhouse.

How do the Angels do what the Mets can't? Two words: Gary Matthews.

His bad-ass bat has held the fort while Torii Hunter recovers.

From the sound of fans, you'd think the Son of Sarge had deserted. One guy bitched on the radio right after Matthews mashed a three-run homer in L.A.'s 10-5 triumph over Tampa Bay.

The caller: "How can fans cheer him? Did they forget his error from the inning before?"

Bucky Fox is an author and editor in Southern California who runs BuckyFox.com.
Posted by Unknown at 11:17 AM No comments:

Corner on the Angels; calling on Dave Smith 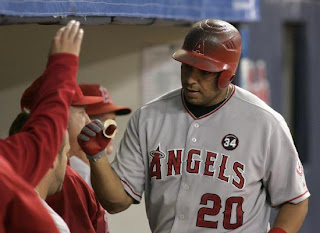 An acquaintance in the East commented on the Angels recently with this: “They’re the worst of the contending teams.”

No answer has landed. Not while the Angels win every bloody day.

If the answer ever comes back yes, I say: Good.

Let the masses miss the Halo heat. The fewer the fans who catch on, the better. By the time they do, Anaheim will own a second championship.

Take 2002. That summer while the Angels played in Boston, I wrote a pal in D.C. about Troy Glaus’ greatness. My friend’s take: Who him?

After Glaus finished with 111 RBIs and the Angels their title, I didn’t bother asking my friend again. Didn’t matter.

Kinda like the stock market. When hardly anyone has heard of a company, that’s the one that rockets. If you check out STEC and FUQI, it’ll probably be the first time. Yet they’re scorching. By the time Main Street invests in them, Wall Street will have seriously cashed in.

So let most of baseball’s gazers wallow in all things Boston and Philly. I’m keeping my eye on the best ball.

Come in, Dave Smith. Two years ago he resurfaced on L.A. radio as the drive-time voice of KLAA. He gave the Angels’ station the edge it needed.

Now he’s gone. Smith turned into dead air this summer, and that’s a drag for these parts. He’s the self-professed Sports God for a reason. He’s been here all his life and shares a sharp passion for our teams that no other broadcaster matches.

I asked a few people connected to the Angels what happened. Was Dave fired? Where is he? No one is clear. Not even Smith, who has nothing on TheSportsGod.com about his whereabouts.

Come back, Dave. You were wrong about Mitch Kupcake. And wrong about running pitchers’ arms ragged. But you had a point about Sissy Vujacic. And it was tough to change the channel.

I have the perfect spot for Smith. 570 KLAC in the afternoon. Replace the screamers who turn their points into turbulence. Many Angel fans would stick with Jeff Biggs at KLAA. Aside from that, Smith would crush ESPN’s Mason and Ireland.

Speaking of dead air. What’s with Los Angeles pulling the plug on its top radio talent?

Dave Smith was only the latest talent to vanish into the ether.

In the past year we lost Larry Elder. He went the way of the dial when KABC traded him in for syndicated Mark Levin.

Now Levin is brilliant. He hits the mark with his darts, such as: Hillary Rotten Clinton, Little Dick Durbin and the New York Slimes.

But he tosses them from a basement in Virginia. He’s not Los Angeles.

Elder is. To the core, as he underscores with his Sage from South Central moniker.

And he was one radio voice who nailed it on economics: Downshift on government, and the American machine will rocket.

The good news is Elder might run for the Senate next year. If he decks Barbara Boxer, the radio rotation will be worth it.


Bucky Fox is an author and editor in Southern California and runs BuckyFox.com.
Posted by Unknown at 4:25 PM No comments: