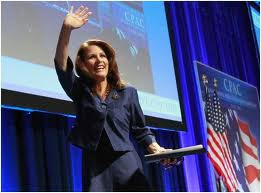 Michele Bachmann. With one l. And two n's. Spell her right, because she's right on the issues  — so much so, we're looking at a President Bachmann on Jan. 20, 2013. Hope she remembers me after her swearing-in. We met a couple of years ago at my newspaper's office, and I've been swooning since.

The Mess. You might know them as the Mets, short for Metropolitans, New York's National League baseball contingent. Once we called them the Amazins, although the only amazing feat with 2011's version was first place in the first week. Sad to say, my faves are headed for last place in the last week.

Libya. Bet you never thought we'd relive the Marines' Hymn's coolest line  — "To the shores of Tripoli." Let's hope this Obama War Prize entry doesn't so escalate. After these ment Muslim massacres in Afghanistan — all over a burned book — let's go the Pat Buchanan route: Get out.

Buttler. Yes, add that t to the Indiana college. It was all behind in the title-game loss for a basketball team that shot like the Dogs they are. And too bad. America had to be rooting for this little university to school the Huskies of UConns.

Run, fat folks, run. That's exactly my solution to America's fake medical problem. Here's another one: Quit that fifth trip to the buffet trough. The only presidential contender who had the guts to share such truth was Mike Huckabee a couple of years ago. He's bulked up since, so never mind.

Lakers land. Right on their third straight bull's-eye. This time they'll do it by beating the Chicago Bulls. And what a way for Phil Jackson to end the greatest coaching run in history. Six championships with the Bulls, six with the Lakers — with a farewell shot vs. his old team in the NBA Finals.

Walker, Wisconsin Ranger. When the Republicans run the table in 2012 — cashing in with the House, Senate and White House — they'll thank the governor who stood tall in the Wisconsin winter of 2011: Scott Walker. His face-off with unions woke Americans to the budget-busting scam: jack taxes so government employees could rake in triple the salaries and benefits of civilian workers. What's really stunning is these labor-group goons haven't gunned down the Ranger.

Happy days. We're in the middle of them. For all our grousing, come on. This is the greatest country, and we should constantly celebrate that. Just got into a terrific book "Young Stalin" by Simon Montefiore, and the grime and crime that stuck to the future Soviet slaughterer should wake any American to this reality: We have it good, baby.


Bucky Fox is an editor and author in Southern California.
Posted by Unknown at 9:41 PM No comments: