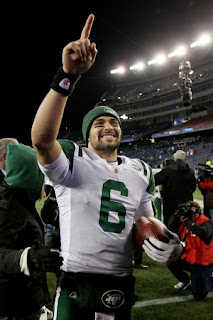 Something about New York puts the old before England, the y after Pats.

The Giants had that thing. Erased the un from unbeaten Patriots in the 2008 Super Bowl.

The Jets have it right now. Mugged old England Sunday. And are on a flight pattern to Pittsburgh, then Dallas for the Feb. 6 Super Bowl.

I saw it coming. Got up Sunday with an awakening: The Jets are helmet and shoulder pads above Belichick's bunch.

We were brainwashed into idolizing old England because of three NFL titles in the first half of the 2000s. And Jet fans were led to fear the Belichicks after that 45-3 bombing 24 hours before Pearl Harbor Day.

Good for Rex Ryan that he told all to get a grip. He said the Jets had the talent to win in Foxsorrow. They had more: a superior roster. Mark Sanchez wasn't about to pass that up.

Pete Carroll didn't roll after all. I thought he would after Seattle's Saint slapping. Then came Chicago's wizard-ending blizzard. Carroll looked stone-cold out of his league.

As you recall, that's what the coach told Sanchez he would face if he left Southern Cal after his 2008 junior season. The QB simply took his cue and headed for millions. Now he's in a second straight AFC title match. And Carroll's in an off-season.

All it took was shedding those baby blues. As soon as LaDainian Tomlinson donned Jet green, he turned into a winner. No more sulking on Diego's bench during another playoff meltdown. Dude is rushing, catching and scoring like he knows what time it is: clutch.

Speaking of green. Amazing the Jets won with green pants Sunday. Always seemed like it took all whites to scrub the best into them. Like in Miami in January 1969. All whites all the way in the Super Bowl. Shocked the Baltimore Colts, thanks to a delta force D and Joe Namath. Now D and Sanchise spell title No. 2.

As for the Bowl. The Jets will have matching Supe colors in the form of Green Bay. Brother, did the Packers flex their stuff Saturday in Atlanta. Aaron Rodgers showed exactly why they were dying to see Brett Favre go in 2008. With Rodgers' receivers and that secondary, Bay is a beast.

The Brady hunch. You see teetering Tom and Jolly Rodgers, and the NFL horizon is clear. Your quarterback better move it or he's done.

Brady's stock sank vs. the Jet strafing. Much more of that, and he'll make way for the son of my old high school pal Axel Hoyer: Brian Hoyer.

I had Brady fifth on the all-time QB lists, but he's slipped to sixth behind John Elway. The guys on top are Johnny Unitas, Joe Montana, Bart Starr and Terry Bradshaw.

Then there's Ben Roethlisberger. He could pass Brady if the Steelers win a third title under him. Will Big Ben pull that off this season? No.

The call. My Steeler zealot buddy Derrick Jones says his beloved will win 31-17 Sunday. Gotta break it to Derrick and the rest of Steeler Support.

With Rex Ryan calling the shots and cheering with his boys in the end zone after a limp that Deion Sanders hilariously imitates on NFL Network, the Jets win 24-21.


Bucky Fox is an author and editor in Southern California who runs BuckyFox.com.