Jets In The Clouds 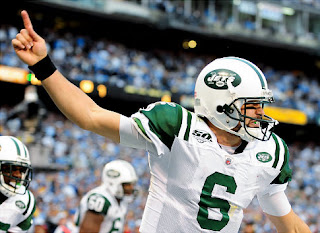 You bet. By reaching the playoffs. By winning their first-rounder in Cincy. By sticking it to San Diego in Sunday’s second-rounder.

The Jets have fans like me flush with green bliss.

Watching the Sanchise tame the Bengals two straight weeks trumped Broadway Joe in one respect. Namath faced the Oakland Raiders twice in the 1968 American Football League season and could only split.

Only? What Joe Willie did was lose the Heidi Game, then black out Oakland in the AFL final. That gave New York a ticket to the Super Bowl, where Namath backed his guarantee with football's greatest upset, beating Baltimore 16-7.

The Jets looked Super in their all-white unis and helmets that sport the second coolest NFL logo after the Colts' horseshoe. And haven't won a championship since.

Buddy Ryan was an assistant coach on those Jets. His son Rex is head coach of these Jets. And made a Namath-like call heading into this month's playoffs. "We should be the favorites," Rex said two weeks ago.

Now here the Jets are calling out the Colts again, this time for the AFC championship.

Even if the Jets don’t make it to the Feb. 7 Super Bowl — in Miami, just like 41 years ago — they've been the shock of early 2010. What other surprises can we expect the following 11 months?

February: Lindsey Vonn. As the Olympics hit the snow of Vancouver midmonth, the Babe of Burnsville, Minn., hopes to shed memories of 2006. That's when she crashed while training for the Torino Games and failed to win a medal. Since then, she's skied past them all on the World Cup circuit. Will she come through in Canada? Yes.

March: Manny Pacquiao. The Filipino Fist is coming off a battered eardrum during his otherwise safe pounding of Miguel Cotto last November. With that injury, PacMan is sure to be shaky as he enters the ring against a gun from Ghana named Joshua Clottey. Nah. Pacquiao will somehow pull the trigger on this triumph in Texas in time to return home and win in the political arena.

April: Mizzou. My Tigers own exactly one national championship. It came in baseball in 1954. Now make it two, with the Tigers leaping atop the Final Four in Indy.

May: Andrew Bynum. I've been on a trade-Drew campaign recently. Now he makes me and fellow naysayers look silly by standing tall for the Lakers. Right in the thick of the NBA playoffs.

June: Jo-Willie Tsonga. The Muhammad Ali double jabbed to the 2008 Aussie final, but needs a knockout to put him on tennis' list of big hits. He'll swing his way there with a Paris-poppin' performance in the French Open.

July: Lance Armstrong. He pedals all the way back to the peak — over the Alps and into Paris to grip his eighth Tour de France championship. And we thought he really was done after his seventh straight Tour title in 2005.

August: Tiger Woods. Gotta admit I loved seeing this stealth thug mug himself with his thong chasing. But kiss off his career? No way. Thanks to his new sex appeal, Tiger will roar beyond the rough. In time to win the PGA in Wisconsin.

September: Justine Henin. The Belgian Waffles keep stacking up tennis titles. Kim Clijsters won the U.S. Open in 2005, retired a couple of years later, changed her mind, then won it again in 2009. Henin also owns two Open crowns. Her last came in 2007. The next year she left the court as No. 1 in the world. Now she's back and conquers New York for Open trophy No. 3.

October: Garrett Gilbert. No one but his family heard of this alliterative ace. Until he almost won college football's national title game to start the year. Now the Texas quarterback's in his second season. Or in the vernacular of the TV dopes, a true sophomore. And winging the Longhorns past Oklahoma in the Red River Shootout.

November: The Mets. No way they'll let the Jets steal the Amazin' tag all year. New York's National Leaguers claimed that crown in 1969. Now they wear it again, with Carlos Beltran joining Jason Bay in time to power atop the World Series.

December: Pacquiao-Mayweather. Just when you thought this megabout was KO'd, off the deck it comes. Only kidding, says Pretty Boy Floyd after his drug slap at PacMan. The Filipino isn't laughing. He bloodies Floyd's smirk and perfect record. Now Pacquiao stands 52-3-2, on top of the world. And waving bye to boxing.


Bucky Fox is an author and editor in Southern California who runs BuckyFox.com.
Posted by Unknown at 5:12 PM No comments: 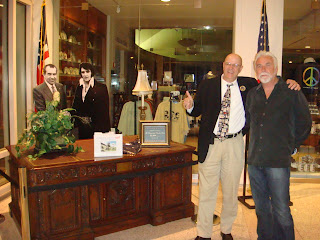 President Nixon would be turning 97 next Saturday.

The Richard Nixon Library will celebrate the birthday, with special huzzahs from daughter Tricia. Can't wait to meet her. I'll make a beeline there since the Yorba Linda birthplace is just down the highway from me.

You can imagine the fireworks in three years for RN's 100th. All the living presidents are sure to show up.

They better. In Richard Nixon, they'll be toasting one of the best of the 43 men to run America. There's George Washington, yes. And Lincoln, Ike and Jefferson.

For pure accomplishments, give me Nixon.

America keeps rising because we have always played for high stakes. Thomas Jefferson put serious chips on the Louisiana Purchase. Abe Lincoln bet hundreds of thousands of lives on preserving the Union. FDR gambled on D-Day. They all won big.

Then there was the greatest card player to reach America’s highest office: Richard Nixon. The man who cleaned up playing poker in the Pacific during World War II played for huge pots as president and collected.

China. This was Nixon’s ace. He saw the world’s biggest population in darkness and drew open the curtain. Since his 1972 drama, the Chinese have been performing an economic boom on the world stage. Amid all that buying and selling of our goods, watch for another act that comforts America: China rejecting communism.

Vietnam. Nixon had a winning hand in January 1973. He ended America’s longest war. South Vietnam looked like it would stay free the way South Korea did. Only when Congress pressured the President to resign the next year and surrendered in Southeast Asia did that hand fold.

Air and water. Nixon started flushing the grime from America’s skies and rivers by opening the Environmental Protection Agency in 1970.

Voting age. Nixon shuffled the law to let 18-year-olds vote. His signature on the bill in 1970 lowered the age limit from 21 in federal elections. The next year the 26th Amendment to the Constitution made the age change for all elections.

Israel. Nixon proved to be a stud at what he called nut-cuttin’ time. He saw the Jews losing steam amid the Yom Kippur War in 1973, so he stepped on the gas. He shipped every aircraft in sight to Israel’s defense. It turned out to be a bigger airlift than the Berlin version of 1948-49 — and saved our ally in the desert.

Desegregation. Nixon faced a weak hand when the Supreme Court ruled in 1969 that schools had to bus children to achieve racial balance. He displayed bluff and brilliance, somehow steering the buses past livid parents and through a Southern Strategy that turned those states his way in the 1972 landslide.

Killing the draft. After China, this is Nixon’s lasting chip. He pledged in his 1968 campaign to end the draft, and he came through on July 1, 1973. Thus started the all-volunteer Army. With soldiers who want to fight for America and earn the good money that comes with service, the Nixon-born military has grown into the most muscular in history.

The moon. Nixon oversaw all six manned lunar landings from 1969 to ’72.

Just take those moon landings. Each one came while America was in the heat of the Vietnam War. Did Nixon wring his hands like lefty did five years ago over dealing a lousy 4% of Social Security taxes into private accounts? No. The President stared at the cards he was dealt and raised the stakes.

That’s what makes America No. 1.

Now deal. We have a birthday to party for.


Bucky Fox is an author and editor in Southern California who runs BuckyFox.com.
Posted by Unknown at 12:34 PM No comments: