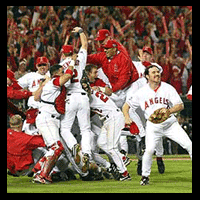 Line of the decade hit the office the other day:

Other than that, you won’t see mention of him in this breakdown of the 2000s. This is about sports, not golf.

2000: The Lakers win the first of three straight NBA titles. On their way to Team of the Decade. Shaq provides the muscle, but in four years he’ll flee and rip L.A. The city’s hero is Kobe. He sticks it out during the drag days of mid-decade, scores 81 in a 2006 game against Toronto and wins a fourth championship in 2009. No question. Bryant is Player of the Decade.

2001: The 9/11 World Series. The massacre pushed the Diamondback-Yankee clash so far back, Derek Jeter turned into Mr. November. So much drama at Yankee Stadium: late homers, “God Bless America.” Then came the ninth inning, Game 7, Arizona’s stadium. The D-comebacks won it, thanks to Luis going Gonzo against the arm with the Mo, Rivera.

2002: The Angels win it all. And what a World Series. Seven gut games against San Francisco that rivaled the Fall Classic of the year before. Tim Salmon’s Game 2 heroics. Spiezio’s Scott Heard Round the World in Game 6. As AngelsWin.com relays: By now, most Angels fans can recite Rory Markas' call verbatim: "Here's the pitch to Lofton. Fly ball, center field. Erstad says he's got it. Erstaaaaaad MAKES THE CATCH! The Anaheim Angels are the champions of baseball!"

2003: Andre Agassi is forever Grand. This was his third Aussie Open trophy in four years. While so many players sobbed about the tropical oven Down Under, Agassi simply sizzled. This made his Slam haul eight, up there with tennis’ greats. Yes, Sampras and Fed were better. But they didn’t have that Andre aura. Maury Allen put it this way in a recent piece at TheColumnists.com: “When you are around athletes all your professional life, as some of us have been lucky enough to be, you can spot stardom. . . . Andre Agassi took over the breakfast room.” So Andre lied about his long hair. As a fellow baldy, I’ll give him a pass. And keep remembering how cool he was, from Frankfurt to Paris to London to New York to L.A. to Melbourne.

2004: The Red Sox vault from nearly dead to Yankee killers. Really the Comeback of the Decade. No baseball team had shed an 0-3 series deficit. And Boston had played mitt to New York’s pounding going back to the Joe D days. Not this time. Riding the crunch-time bat of David Ortiz, the Sox stuck it to the Yanks for the pennant and swept St. Louis for the world title. Their first in 86 years.

2005: City of the Decade? Boston, hands down. The Red Sox won two titles, the Celtics one. And the Patriots three. Their third came in the ’05 Super Bowl, a 24-21 thriller over Philly. Tom Brady lasered the football mostly to Deion Branch. In the end, the Eagles were sick of seeing them.

2006: Texas 41, Southern Cal 38. Vince Young with the winning touchdown in the January BCS title game to cap the 2005 season. The Longhorns national champions for the first time since 1969, the last time you’ll ever see an all-white gang pull that off. This was simply the Game of the Decade. I figured the Trojans would blow out the Horns. The California kids had more talent and the best coach, Pete Carroll. They also had a backyard field, the Rose Bowl. And a 12-point lead late. All Young did was win, just as the QB keeps doing with the Tennessee Titans.

2007: Mizzou No. 1. The snapshot was so rare, I bought two Sports Illustrateds freezing my Tigers’ spot atop college football. The Chase Daniel cover and Jeremy Maclin inside page adorn the Fox Den. I knew the moment wouldn’t last long. It didn’t. The next week, Oklahoma dealt us misery in the Big 12 title game. When will Missouri place first in the land again? Maybe 2017 or 2027. The wait is on.

2008: Phil Jackson. Now this is a giant. Not just because he stands 6-8. Also way up there is his championship number: 10. Six with the Chicago Bulls, four with the Lakers. He would get that fourth in L.A. by 2009, but his handling of this team in 2007-08 was exceptional. SI’s preseason edition predicted a Laker sinking. No one figured anything much better. Except me. Early in the campaign I wrote here something that almost came true, if only the Lakers had overcome Boston in the NBA Finals: Many fans dismiss him as lucky to have coached Jordan, Shaq and Kobe. The Jackson jeers get so loud, listen when he leads the Lakers to the NBA championship this season. Instead of lauding him for landing a record 10th trophy, some will grouse that of course he won; who wouldn’t with Kobe and Andrew Bynum? You see how silly this gets?

2009: Manny Pacquiao. If not for Kobe, the Filipino Fist would be 2000s’ Tops. So let’s make him the Foreign First. How stout was he in bouts? Won seven world titles in seven weight classes this decade. By the time he was fitting his last belt after belting Puerto Rico’s Miguel Cotto last month, he needed to let it out a few notches. Suddenly the skinny slug getting rice kicked in his face is flexing welterweight muscles. And aiming to nail Floyd Mayweather. But that’s next decade.

Bucky Fox is an author and editor in Southern California who runs BuckyFox.com.
Posted by Unknown at 6:35 PM No comments: